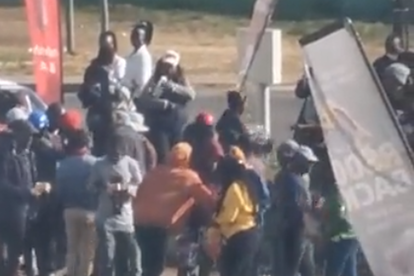 A war of words has exploded between local branches of the DA and the ANC in uMngeni this week. The KZN municipality changed hands to become a blue-run region in November 2021 – but the former ruling party now stands accused of ‘standing in the way of service delivery’.

Francois Rodgers is the DA’s official leader in KZN. He has received information that a new wave of protests and unrest in uMngeni has been ‘orchestrated by key ANC members’. Rodgers says that they have photographic AND video evidence to support their claims.

Mayor Chris Pappas has since uploaded the incriminating footage to his social media pages:

There are curently protests in a part of uMngeni Municipality. This is a video of ANC councillors handing out chips and bread to people so encouragement them to participate in the closures.

One year after the July riots and this is what they do. pic.twitter.com/9RHgEafTJm

DA-run municipality brought to a halt by protests

A meter audit was conducted by DA officials at the start of the week. This came after a local transformer was overloaded and ceased functioning, leaving hundreds of residents in a nearby township without power. It sparked a wave of protests, which municipal officials have branded ‘illegal’.

Rodgers now believes that the demonstrators – some of whom stormed the uMngeni council’s offices yesterday – were being encouraged by the ANC. Their political rivals are accused of ‘giving food parcels’ to protesters, while actively taking part in service delivery disruption.

“The Democratic Alliance in KwaZulu-Natal condemns in the strongest terms the ongoing illegal protests in uMngeni that are being allegedly orchestrated by the ANC. An overload of illegal connections ended up blowing a local transformer.”

“We have since seen photographic evidence of an ANC vehicle that was part of the protest and have also seen a video of ANC members handing out food parcels to the protesters. As a result of this protest, service delivery in the municipality have been brought to a standstill.”

“Municipal offices have had to be closed and some areas are still inaccessible. The ANC does not want to accept defeat and would rather disrupt service delivery out of their desperate need for power.”