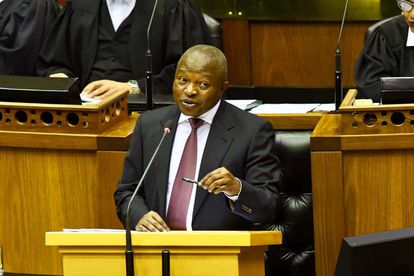 From Russia with love: Deputy President David Mabuza has told MPs that contrary to what they think, he footed the bill for his trip to Russia.

Mabuza answered questions in the National Assembly on Thursday, 10 November – and one hot topic MPs wanted clarity on was his alleged poisoning, which prompted his visits to the country, located in Eastern Europe.

Mabuza returned to South Africa from Russia back in August, after having spent more than a month there receiving medical treatment. The deputy president has been making those trips since 2015, when he was allegedly poisoned as Mpumalanga Premier.

“I am in front of the House strong enough to discharge my duties. What I can say is that as a person concerned I am grateful to the progress I have made with regard to my health. I have covered the cost of my treatment, the travelling 100%. No money was paid by the South African government towards my treatment,” said Mabuza.

ALSO READ: ‘He had to take time off’: Ramaphosa defends Mabuza’s Russia trip

The controversy surrounding Deputy President David Mabuza’s poisoning and his secret trips to Russia undoubtedly have the makings of the perfect spy novel, especially given all the secrecy – something which the Democratic Alliance’s (DA) Natasha Mazzone had no problem asking about.

“Deputy president, while you were gone there was a lot of rumour-mongering going around and, as you know, perception in politics is everything and we were being told that you had been specifically poisoned by members within your own ranks …,” Mazzone said to Mabuza.

Mazzone asked Mabuza to put all the rumours to rest by revealing everything about his visits to Russia.

“And I feel like it is time for you to be frank about this so we can do away with these kinds of rumours. You had a medical team in Russia, which for many people seems slightly James-Bondish, if you will,”

But Parliamentary Speaker Nosiviwe Mapisa-Nqakula wasn’t having it and didn’t allow Mazzone’s question.

“Your question was whether the deputy president met anyone in Russia other than [for] his medical treatment. Now you are going on and on about poisoning, which has nothing to do with that, and I really want to say to you that you are out of order,” Mapisa-Nqakula said.