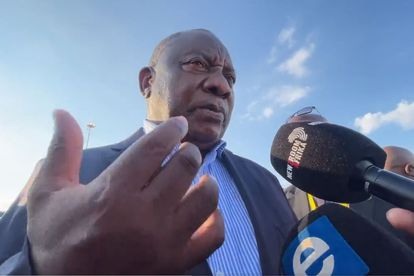 After over two years of lockdown, when will South Africa finally not have to live under a State of Disaster and all the rules and regulations that come with it? If you ask President Cyril Ramaphosa that question, the answer is sooner rather than later. The president is in the North West this weekend and has been holding his Presidential Imbizo. He also took the time to receive his COVID-19 booster vaccine. Once he was done, he faced a couple of tough questions from journalists.

Cyril Ramaphosa on ending the State of Disaster

The State of Disaster currently comes to an end on the 15th of March. When asked about its possible renewal, Ramaphosa revealed that government is working hard to bring a “logical conclusion” to the matter.

“We are giving consideration to that. I want it to come to an end. We are looking at medical or health measures to put in place, to enable us to continue managing the pandemic. It will not be heavy-duty, it will be light duty. People shouldn’t stress too much about this. We are finding the best way possible to bring a logical conclusion to the State of Disaster.”

Ramaphosa gets his booster jab

Before his comments to the press, Ramaphosa received a shot of the Pfizer vaccine as his booster. While getting his jab, the president called on all South Africans to come through and make use of the millions of vaccines in waiting.

According to a new circular from the Department of Health, from Monday the 14th of March, everyone who has been vaccinated with one shot of J&J, can now get two boosters. And since mixing-and-matching of vaccines is now allowed. You can boost your one J&J jab with two doses of Pfizer. That would mean that you are effectively “fully vaccinated” with both J&J and Pfizer.

If you want to get vaccines with a Pfizer jab, you better act fast. The Department of Health has also confirmed that from August onwards, there will only be J&J vaccines available in the country. This is because all the Pfizer vaccines we have inside the country, expire on the 31st of July.