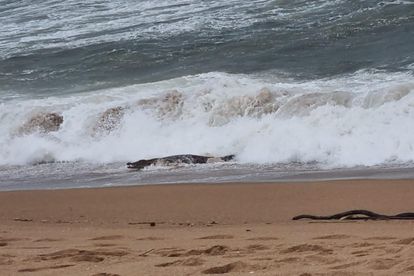 Another crocodile was spotted at the Tongaat Beach.
Photo: Facebook

Another crocodile was spotted at the Tongaat Beach.
Photo: Facebook

A crocodile has been spotted at a beach in Tongaat, KwaZulu-Natal (KZN). Earlier this week, 12 crocodiles were washed away from the Crocodile Creek Farm.

Initially nine were rescued and some were still missing. However, it was later reported that all the crocodiles were safely returned to their ponds.

During the week, Kwazulu-Natal Ezemvelo Wildlife spokesperson, Musa Mntambo confirmed they were on the lookout for crocodiles in the Tongaat area after reports that they were at the nearby river.

“Ezemvelo has been informed of 12 crocodiles that washed away from the Crocodile Creek Farm in Tongaat. Seven crocodiles have been recaptured and we are currently looking for the outstanding five. We suspect that they might have walked towards the Tongaat River which is less than a kilometer away from the farm.”

It is not clear whether the crocodile spotted is amongst the bask that was spotted along the Tongaat River earlier this week.

It is highly likely to be the case, despite authorities saying all the missing crocodiles were safely returned to their ponds.

PYTHON WASHES UP IN KZN BEACH

The KZN floods had a disastrous effect on the disbursement of wildlife. Domestic animals were reported missing and animals that reside in the wild were swept away from their natural habitat.

Snake expert Nick Evans also revealed on his Instagram account that he was called to rescue a python which washed up on a beach following the KZN floods.

The star of Dstv channel 180’s Snake Season discovered a 3m-long python on a Westbrook beach on the North Coast.

“I was quite surprised by the size of it. It was well over three metres. It was just a bizarre sight.

“Poor thing must have had a heck of a time. The Tongaat River was quite close. It must have got washed down, and ended up here. It must have been like being in a washing machine.”

It was not only a python Evans discovered as a result of the KZN floods. According to the snake rescuer frogs and Katydids (bush crickets) and various other insects were found in abundance in the area.