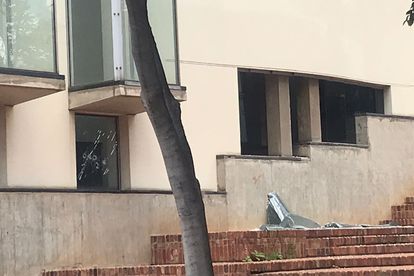 Police have confirmed that a male suspect has been arrested for breaking glass windows and doors at ConCourt. The iconic venue, which serves as the highest court in the land, was vandalised extensively on Wednesday.

The shock scenes come just days after Parliament was set alight, allegedly by Zandile Mafe. The motivations behind this attack on ConCourt are yet to be established, but this incident has unfolded at a highly sensitive time for South Africa.

At first, it was believed that bullets were fired into the chambers. This has since been dismissed by law enforcement officials, and they have confirmed the assailant’s weapon of choice was actually a hammer. Thankfully, there are no human casualties to report at this time.

‘Substantial damage’ to windows and doors at the Constitutional Court

While the National Assembly smolders, another key point for Mzansi has been targeted. Images on social media have captured the extent of the damage, where several hammer blows ended up smashing windows and glass-framed doors.

The Constitutional Court was attacked. pic.twitter.com/dhKp99cml3

The Johannesburg-based courthouse serves as an indisputable symbol of South Africa’s democratic history. Judges Matter, a collection of legal experts in South Africa, have described the attack on ConCourt as ‘outrageous’ – and they are hoping a swift prosecution will follow the arrest:

“Although it’s not clear at this stage whether this relates to the release of the report of the Zondo Commission into State Capture, it is nevertheless gravely worrying. Judges Matter condemns this outrageous attack on the Constitutional Court building as a symbol of our judiciary and constitutional democracy.”

“The damage to the Constitutional Court building come only a few days after a devastating fire ravaged the National Assembly building. We call on law enforcement authorities to act swifty to investigate, arrest and prosecute those responsible.”