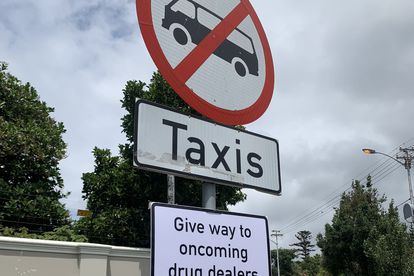 Fair play, this is a 10/10 response from the community – Photo: Supplied

Fair play, this is a 10/10 response from the community – Photo: Supplied

Now THIS is what we call ‘power to the people’. A sign has appeared in the Cape Town suburb of Mowbray this month, taking the piss out of policing in the area. The advisory sarcastically tells locals to ‘give way for oncoming drug dealers’.

Countless residents of this neighbourhood have taken their complaints online, and social media is chocked-full of residents bemoaning the way drug dealers are allowed to operate ‘with impunity’.

The Southern Suburbs of Cape Town are usually seen as one of the more desirable regions of the Mother City. But things have gone downhill in this particular region. Drug-pushers are conducting their business largely untroubled – and the police response has been less than adequate.

‘We report drug dealers to the police, but nothing happens’

It’s worth noting that the drug dealers are not actually selling to residents in the street. Instead, groups of ‘highly organised syndicates’ use the neighbourhood as a meeting place. The region has easy access to the N1, N2, and a handful of key M-roads.

One local who lives between Mowbray and Rosebank has described her experience with the unpleasant situation. She describes a ‘surge’ in drug dealer activity of late, saying that community policing groups are now flooded with reports about these illicit exchanges.

“We’ve had a surge of drug deals in our ‘hood of late. Living in the Southern Suburbs, we report to the police, but nothing happens. And the dealers operate without fear. Our neighborhood security limited in what they can do. About three or four drug deals PER DAY are being reported.”

‘Give way to drug dealers’ – where have we heard that before?

The protest is a cunning one – but there’s every chance that the gatvol residents have taken their inspiration from elsewhere. A few years ago, a Scottish resident living in London noticed that a sign with the exact same phrase had been erected in his neighbourhood.

A parking bay ‘for drug dealers’ was also outlined by this anonymous hero. The video went internationally viral, and it’s quite possible that it had a major impact on a number of Good Samaritans in Mowbray. You can see the now-infamous clip here: