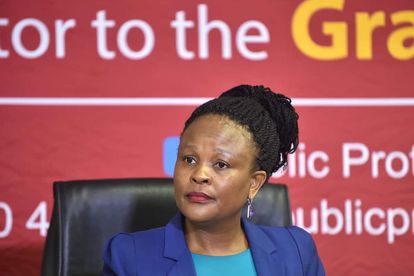 Public Protector Advocate Busisiwe Mkhwebane is holding her head high and seemingly turning to divine intervention, in the wake of her suspension by President Cyril Ramaphosa – that is if her latest tweet is anything to go by.

Ramaphosa suspended Mkhwebane with immediate effect on Thursday, 9 June 2022. This is until the National Assembly concludes her impeachment proceedings.

“President Ramaphosa has fulfilled his obligation to provide Advocate Mkhwebane a fair hearing by according her sufficient time and opportunity to make submissions. In considering each element of the Public Protector’s submissions carefully, the President has taken into account the nature of the Public Protector’s office and his own Constitutional obligations,” the Presidency said in a statement.

SOME OUTRAGED BY MKHWEBANE’S SUSPENSION

Public Protector advocate Busisiwe Mkhwebane is yet to give an official response to being temporarily forced out of office by President Cyril Ramaphosa, but there has been a wave of reaction to the news.

“The unfitness to hold office has NOT been established by Parliament. The Removal trigger alluded to in s194 (3) that the President relied on has not been activated because the Parliament Committee is yet to hear the DA case against Adv Mkhwebane. It’s way premature to suspend her,” the party said.

The timing of the suspension has been questioned as it was only on Wednesday that the public protector announced she would be investigation the president for possibly breaching the executive code of ethics, in relation to the robbery at his Limpopo farm.