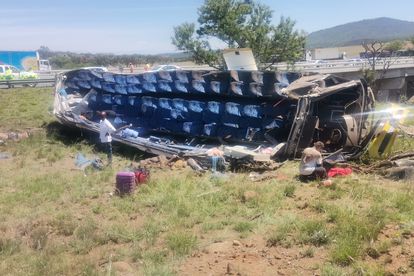 Ten people have been killed and at least 50 have been injured in an Eldo Coaches bus accident on the N3 in KwaZulu-Natal on Tuesday.

SAPS spokesperson Thembeka Mbele said that the Eldo coaches bus, carrying about 66 passengers, was traveling along the North bound carriage lane of the N3 freeway when the accident occurred.

“It is alleged that there was a blow out on right front tyre. The driver of the bus lost control causing the vehicle to veer over the centre medium and as well as over as South bound carriage lane,” Mbele said.

“The vehicle then overturned and came to standstill off the roadway. At this stage there are 10 fatalities. The injured have been transported to local hospitals. Culpable Homicide case has been opened at Colenso SAPS for further investigation,” she said.

Netcare 911 spokesperson, Sean Herbst, said the firm’s team and multiple other emergency services had responded to the N3 bus accident near the Tugela River.

“Reports from the scene indicate that the bus was travelling in a North Bound direction when the driver lost control. The bus crashed through the barrier into the South Bound lane, rolling several times, ejecting some occupants in the process. The bus then came to rest on its side in the veld next to the N3,” Herbst said.

“On arrival of emergency services, at least fifty people were found to have sustained injuries ranging from moderate to serious. Currently, it is believed that at least ten people have died, however this is still to be confirmed. This is a developing story and all details are subject to change as more information becomes available,” he said.

Eldo Coaches said in a statement that its management was “deeply saddened” to inform the public about the accident involving one of its coaches at around 11am.

“According to information at hand, the accident was caused by a blowout of the front wheel tyre and the coach rolled. We are cooperating fully with local authorities to ensure that the accident is thoroughly investigated.”

Eldo Coaches said the scene was still active and the public would be updated with further information as it was received.