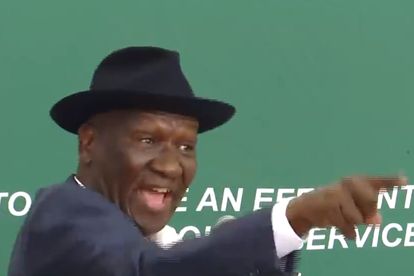 Bheki Cele lost his cool in a very public forum on Tuesday, and the after-effects are likely to remain with him for quite some time. SA’s Police Minister was confronted by Action Society’s Ian Cameron – and the interaction prompted the politician to lash-out in dramatic fashion.

Police Minister may have to fight ‘several probes’

Footage of the incident has been shared far and wide. Cele rants and raves at a cool and collected Cameron, telling him to ‘shut up and get out’. After yelling in his general direction, police officers grabbed the Action Society leader, and frogmarched him out of the event in Gugulethu.

In an official statement from the lobby group, they confirmed that they are now ready to raise a series of complaints against Bheki Cele and SAPS:

“Action Society and I will be laying four charges and complaints against Bheki Cele and the members of the South African Police Service who spinelessly removed me from yesterday’s community meeting held in Gugulethu.”

Cameron was there to challenge Cele on a number of failures pinned on his department. But instead of engaging in the debate, the hatted minister flew off the handle, lecturing his adversary about life during the struggle years. That’s when the screaming and shouted began.

The anti-crime advocate stood his ground in the face of this heated response, before several law enforcement officials dragged him away. A video shared online shows how Mr. Cameron was grabbed and pushed into the car park outside.

This infraction has left Action Society with no other choice but to pursue their legal options. A total of FOUR complaints will now be raised, each with different authoritative bodies…