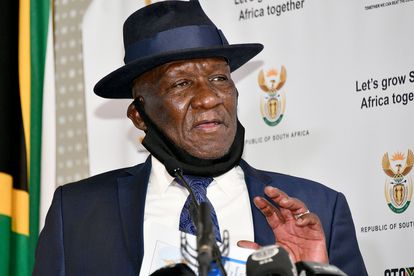 Police Minister Bheki Cele was absolutely incandescent on Wednesday, after he delivered his response to the political controversy bubbling away in Phoenix, KZN. DA leader John Steenhuisen has defended his party’s posters in the region, which make reference to the July Riots – but this has boiled the blood of Mzansi’s top cop.

Bheki Cele and the DA have been bickering for years. The minister and the opposition do not see eye-to-eye, disagreeing on everything from lockdown policies to the hatted politician’s own competency. However, Cele has unashamedly cranked up the ongoing tensions, by branding Steenhuisen as a ‘brainless thug’.

That’s because the posters in Phoenix read; “The ANC calls you racists, the DA calls you heroes”.

At least 20 people were killed here when vigilantes clashed with looters. It was one of the most harrowing moments of South Africa’s democratic era – and the DA’s decision to steam-roller into Phoenix with such a divisive message has left political opponents spitting feathers. The reaction online has also been vicious…

It’s understood that the DA is on the verge of removing these offending posters, despite Steenhuisen’s best efforts to defend their purpose. He claims that the materials on display only refer to the residents of Phoenix who obeyed the law, but the damage has now been done – and this attempted intervention left Bheki Cele rattled:

“For him to put the extra salt of racism on this matter… I have always had doubts about Steenhuisen. I don’t have a doubt now, I am flabbergasted. To me, he is a thug, he is a political criminal that the nation must deal with as such, he has no conscious, he has no brains whatsoever – for him not to find a problem [with] what happened in Phoenix.”

[MUST WATCH] Following his continued efforts along with the Peace Committe to quell racial tensions in #Phoenix following the murder of 36 people in that area & injury to 50 in July, Police Minister General Bheki Cele reacts to the election posters erected in the neighbourhood. pic.twitter.com/YSbeX5G1Lf