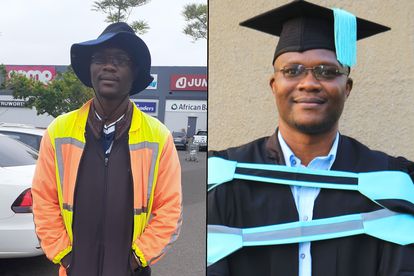 Fabrice Kapya has defied all expectations on his educational journey – Photo: University of Pretoria

Fabrice Kapya has defied all expectations on his educational journey – Photo: University of Pretoria

We are HERE for this! Asylum seeker Fabrice Kapya has enjoyed something of a meteoric rise since he came to South Africa in 2018 – and thanks to his iron will and relentless determination, this former car guard became a PhD candidate within four years of his arrival.

The near-miraculous turnaround can largely be credited to Kapya’s relentless thirst for knowledge. He used to work 13-hour days in the Wonderpark Mall parking lot, making up to R2 000 a month and putting every available cent aside for his studies at the University of Pretoria (UP).

University of Pretoria praised for ‘taking chance’ on car guard

A few months after his arrival in SA, the would-be student from DR Congo enjoyed a wonderful stroke of luck: A friend challenged him to apply for a place on the University of Pretoria’s Industrial and Systems Engineering course. Kapya was adamant he didn’t stand a chance in such a competitive field.

However, he chanced his arm – and sure enough, the international application that was submitted TWO DAYS before the deadline was accepted. Incredibly, Kapya continued to work as a car guard while buckling down for his studies.

“I was studying in the parking lot with my student card around my neck. I stayed strong even though I could not feel my legs or my waist, even though my body was sore. When I had a block week, I wouldn’t go to the mall; it cost me R240 a week to get to UP.”

“Not working that week put me in a position where I was almost R740 short. As a result, I had difficulty depositing the R1 000 I had planned to pay each month into my student account to reduce my debt.”

However, just over a year into his university course, something verging on the unthinkable happened: A frequent visitor to the Wonderpark Mall was so moved by Kapya’s situation, she agreed to pay his education fees – to the tune of R18 000!

He was able to settle many of his debts, and the funding helped the engineering student undertake his Masters Degree in 2021. But this is Fabrice Kapya we’re talking about here… there was always going to be more to come.

Last February, UP offered him a position as an assistant lecturer in Industrial and Systems Engineering. This allowed him to work AND complete his Masters by January 2022, and the DR Congo refugee is now a PhD candidate at the prestigious institution.

Former car guard thanks father for driving him to PhD honour

It’s a truly remarkable ascent to the very top for the young man – and he credits his father for teaching him about self-belief.

“My father always wanted us to have a good education. What he left in us is far greater than what he left to us: to have the determination to do what is right no matter how tough a situation is.”

“Pursuing my studies was a way to carry on the mission he started and I’m grateful for being the first in his family to obtain an honours and a master’s degree. Every day that I stood in the parking lot, I thought about my Dad – that motivated me.”