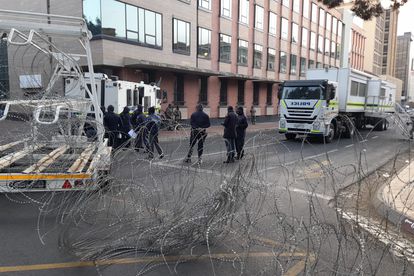 The suspended ANC secretary-general Ace Magashule together with his 15 co-accused, appeared in the Bloemfontein High Court on Wednesday.

‘I AM WELL PROTECTED BY SOLDIERS AND POLICE’

They are facing more than 70 charges of fraud, corruption and money laundering. The charges relate to the alleged irregular awarding of the R255 million asbestos roof eradication contract that dates back to 2014.

The matter has been postponed to 19 October.

There is heavy police and SANDF presence outside the court on Wednesday.

This comes after the State Security Agency (SSA), the DA, and the Free State Development Corporation (FDC) all raised security concerns leading up to the appearance of the accused.

Supporters of Magashule were expected to gather outside the court.

Magashule spoke to the media inside court, saying he is not sure what this is all about.

According to him, the indictment said nothing.

He added that he did not know who the state witness was.

Magashule seemed surprised to learn that his previous personal assistant was a state witness.

“This is a political matter nothing to do with law…. I am ready to clear my name, you see I am here and I am well protected by soldiers and police.”

In 2014, the Free State human settlements department awarded a contract worth a whopping R255 million to two companies – Diamond Hill and Blackhead Consulting. This was to audit and assess houses for asbestos roofs in the province. The project entailed inspecting 300 000 low-cost houses, however, it would later be revealed that almost no work was no done, despite the money being paid.