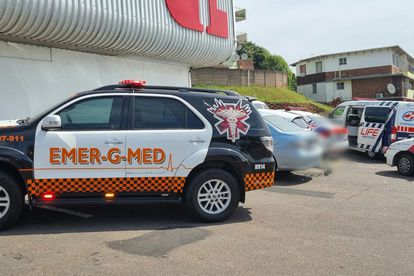 Armed robbers stormed an Ultra Liquors in broad daylight and shot one security guard dead and injured another on Tuesday afternoon.

“They took cash and robbed security guards of their two shotguns. A security guard believed to be 35 years old was shot in the head and died at the scene. Another employee was shot on the hand /arm and was taken to hospital. The suspects fled the scene in their getaway vehicle. The scene is still active,” Mbele said.

Emer-G-Med Paramedics spokesperson Kyle van Reenen said that the firm’s team of paramedics together with Life Response 24/7 were currently in attendance at the business robbery crime scene.

“Two security officers have been shot. Sadly one has been declared dead on arrival of paramedics. The second man has been rushed to hospital privately whilst a third has suffered moderate injuries,” Van Reenen said.

“The South African Police Services are in attendance and will be conducting the necessary investigations accordingly.”

The latest armed robbery follows several incidents targeting bottle stores in the Durban area. Tops in Glenwood Village was recently targeted by burglars who smashed the glass window to gain entry to steal stock, and bottle stores in New Germany have also been hammered with at least 3 robberies reported since January 2021.

According to the Highway Mail ten armed robbers held up staff and stole an undisclosed amount of cash from a liquor shop in New Germany on Friday, 17 January a day after the outlet was robbed in a similar fashion.

“On the previous day three armed robbers entered the shop, held the cashier at gun point and instructed her to empty out a till. According Pinetown Cluster communications officer, Bongumusa Manqele, at this stage no arrests have been made for both cases of robbery,” the newspaper reported at the time.

And in May, armed robbers held up staff at the Makro Liquor store in Umbogintwini in the Amanzimtoti area and made off with alcohol and cash.