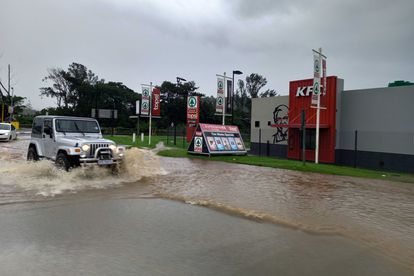 The KZN floods have claimed an almighty death toll, with upwards of 45 people killed by the extreme weather conditions. Gushing torrents of water have destroyed homes and public infrastructure, and weather records have been shattered across the province. But were these weather conditions a direct result of climate change?

The SA Weather Service (SAWS) made a statement to the press earlier on Tuesday. Surveying the widespread damage caused by the KZN floods, the group revealed that more rain is forecast to make landfall during the Easter weekend. However, it won’t match the scale of the downpours witnessed in the past 48 hours.

The horrifying images of cars being swept away and buildings crumbling have led many to ask the fundamental question of our time: Are these disastrous conditions being caused by climate change? According to SAWS, the answer isn’t so black and white, and there’s no straightforward way to put it.

Did climate change cause the KZN floods?

The agency states that, although the KZN floods cannot be solely blamed on climate change, events LIKE this are happening more often because of it. In other words, global warming IS now intensifying the frequency of our extreme weather patterns – even if it didn’t directly cause the event itself.

We told you the answer would be complicated…

“As weather scientists, we cannot attribute individual weather events occurring on short timescales to longer-term events, occurring over years or decades. However, notwithstanding the above, we can state with confidence that globally all forms of severe and extreme weather are becoming more frequent and more extreme.”

“Things like heatwaves, heavy rain, and coastal storm surge events will happen more often. Therefore, events such as the current KZN incident can rightfully be expected to recur in the future and with increasing frequency.”

Meanwhile, SAWS have confirmed that there will be more weather warnings in place for KZN overnight. The good news, however, is that these alerts will drop down from Level 9 to Level 6 – and conditions are set to improve.