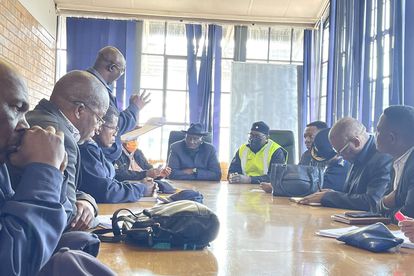 Another mass shooting has left South Africans reeling on Friday. Overnight, suspects – seven of whom have now been arrested – opened fire in separate locations across Alexandra. The Gauteng township was besieged by bullets, and earlier this afternoon, the death toll increased.

Minister Bheki Cele arrived in Alex this morning. Following discussions with the local police force and Gauteng Premier David Makhura, the top cop addressed the media – confirming that the tragedy had been compounded by another death reported in hospital.

The death toll increased from five to six, after the patient succumbed to his injuries in a local clinic. A further four people are still receiving high-level treatment, after they were badly wounded in the massacre.

However, SAPS have been able to move fast and apprehend SEVEN people they believe to be behind these killings. Multiple suspects are now in police custody, all of whom are understood to be South African nationals.

7 people arrested after 6 were killed over two days in Alexandra. #AlexShootings #SAfmBTH

A night of terror in Gauteng’s largest township

The trail of destruction left across Alexandra has angered locals, many of whom have taken part in a protest to ‘shutdown’ the local CBD until more answers have been given. These arrests are a good starting point – and the seven suspects are thought to be responsible for the following carnage: