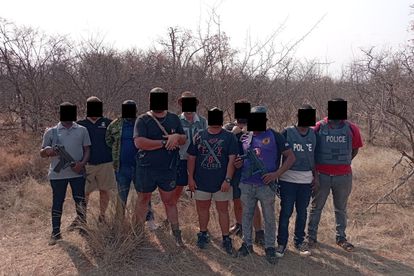 A specialised Neighbourhood Watch team operating in Musina, Limpopo has snared five suspected farm attackers this week, in a location near the border with Zimbabwe. The AfriForum patrol also managed to confiscate multiple firearms from the group.

Farm attackers stopped in their tracks by AfriForum members

AfriForum has around 160 security structures nationwide with almost 10,000 trained volunteers. Some of these response teams receive specialized training, which includes disciplines such as hand-to-hand martial arts, medical training and tactical weapon handling.

They were ‘on hand’ to foil a set of thugs who stand accused of robbing a farm property, and attacking those inside. The Neighbourhood Watch members were quick to apprehend this armed gang, managing to outnumber and outwit them.

Jacques Broodryk, a spokesperson for AfriForum’s Community Safety unit, has praised the members involved in this successful operation, and also noted that SAPS’ intervention was ‘decisive and dedicated’.

“Yesterday the Afriforum Neighbourhood Watch in Musina, with other role players, assisted in arresting five farm attackers. Three firearms were recovered including an R5 rifle. Well done to everyone involved, including the dedicated SAPS members who acted decisively.”

A number of these Neighbourhood Watch patrols are being created by AfriForum, who now boast thousands of volunteers across Mzansi. Those wanting to take an active role in protecting their communities have also been invited to ‘get involved’ with the lobby group

“We are proud of our neighborhood watch members who serve their communities in such a selfless way. SAPS have themselves admitted that they cannot fulfill their mandate. We therefore strongly encourage members of the public to get involved.” | AfriForum Community Safety