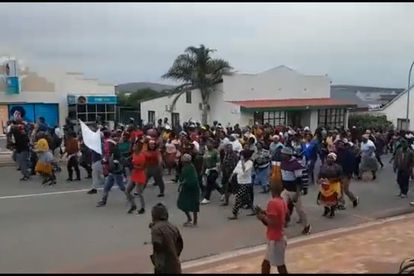 Hundreds of migrant families are seeking refuge in a community hall and mosque in Bredasdorp after violence erupted in the farming town last week. Residents destroyed foreigners’ homes.

According to SABC News, people were injured in the demolition job by residents. The destruction took place after Zwelitsha residents marched to the local municipality and handed over a memorandum of grievances.

The locals are angry that residents are renting dwellings to migrants in the Western Cape town and that local businesses offer them employment.

The memorandum also said locals were frustrated with the lack of job opportunities.

“The group marched to the local municipality to raise their concerns with the management, where they handed a memorandum to a municipal representative.

“As the group returned to their homes, they created splinter groups and deviated from the approved route, causing havoc. The police members used minimum force to restore order,” said SAPS spokesperson Joseph Swartbooi on Thursday.

On Friday morning, there was more violence, two foreign men – aged 23 and 42 – were injured in clashes with locals and transported to hospital for treatment.

Captain FC van Wyk told The South African that the situation in Bredasdorp was under control on Monday, 28 March. SAPS members are monitoring the area, he said.

According to SABC News, at least 450 families are now displaced after their homes were destroyed. The police escorted some residents back to Zwelitsha so they could collect what remains of their belongings.

“This is inhumane. We do not have anywhere else to go. We are stranded and we are calling for people to come to our rescue,” said Zimbabwean community leader, Givemore Nyakarimba, to the broadcaster.

The Cape Agulhas Municipality is working on reintegrating the displaced people. Eben Phillips, the municipal manager, said the destruction was not perpetrated by the entire community “but certain people with their own interests.”

The South African Human Rights Commission (SAHRC) is investigating the possibility that the Bredasdorp violence could be related to the clashes between migrant workers from Zimbabwe and Lesotho in Robertson, according to Chris Nissen.

“We have been monitoring the situation at Robertson regarding the clashes between nationals from Lesotho and nationals from Zimbabwe, who were chased out of Nkqubela.

“We stabilised the situation. It does appear now that some of the nationals from Lesotho as alleged by some people left for Bredasdorp to mobilise the community against Zimbabweans,” said Nissen.