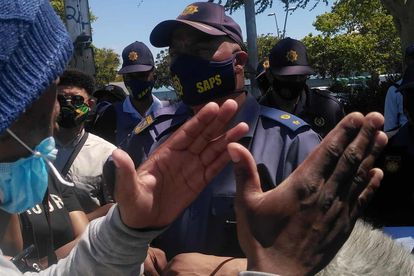 The newly elected head of the University of Cape Town’s (UCT’s) Students’ Representative Council (SRC) has urged his peers to support protests scheduled to take place at Brackenfell High School on Friday 20 November.

An email distributed to students by SRC President Declan Dyer called for students to take action against alleged police brutality dished out by members of the South African police Service (SAPS) during earlier protests led by the Pan Africanist Congress (PAC) in the Cape Town suburb on Wednesday.

Protests have been ongoing in Brackenfell for the past two weeks after a row involving an apparent ‘all-white matric dance’, with Brackenfell emerging as the latest flashpoint for racial tensions in South Africa.

Dyer also holds the position of Treasurer for the Economic Freedom Fighter’s (EFF’s) Cape Metro Ward 57. He told The South African that the UCT SRC is comprised of a diverse range of members with varying political allegiances, and that all were unanimously supportive of previous calls to action distributed earlier in the week.

Dyer was unequivocal in his condemnation of the behaviour of law enforcement officers towards students and protesters, and said that police are acting purely in the interests of white South Africans.

“Yesterday, peaceful protesters, some of whom are our students, again came under attack in Brackenfell, this time by police,” he charged.

“Daily – and possibly more clear now – the police, the state and the many agents of whiteness remind us that to be black in ‘post’-Apartheid South Africa is ‘to be anything except human’. This is why the police, state, and racists stand in solidarity with Brackenfell and are comfortable with dishing out violence to peaceful protesters.”

He lamented a lack of compassion from police towards black people, especially black youths.

“If the Black child is beaten and shot at, it is simply the order of the day. To be silent and complacent in such a time is to stand with whiteness and, as the SRC, we shall not be complicit,” he said. “We, therefore, reject the attacks by the state and its racist Brackenfell friends that finds it fit to express their racism on peaceful black protestors.”

He said that the SRC has a duty to protect those who protest perceived injustices, and vowed to engage in the widely __ protest on Friday with vigour. He told The South African that while support was plentiful, the group set to take part would be considerate of COVID-19 regulations and were in no way seeking to protest violently.

“We must see that theirs is not an individual fight but a collective effort to see Black liberation recognised in our lifetime. We must not be complacent. We must confront and meet the enemy, racism, head-on,” he said.

Meanwhile, the Democratic Alliance (DA) have continued to voice grave concern over the planned protest, saying on Thursday that they have done everything they can to prevent it from going ahead in the interest of ensuring that students – who are currently writing exams – do not become engulfed in the political actions.

“This is not the last time that the EFF will hatch a scheme which seeks only to divide our country on the basis of wanton anarchy, racism, and hatred, and the SAPS and law enforcement must not be naïve as to what is unfolding in our country,” they said in a statement.

“It can never be acceptable for school children to become the target of political protests, and particularly not when the motivations for the protest bear all the hallmarks of political grandstanding and opportunism.”

Western Cape Education Minister Debbie Schäfer met with City officials on Thursdsay to hand over an affidavit motivating why the protest “should either be interdicted entirely, or have tighter restrictions applied and enforced”.

“This follows various threats of violence made on social media by EFF leadership since the protest was given the go-ahead in the High Court, and worrying displays of violence by the PAC in Brackenfell yesterday,” they said.