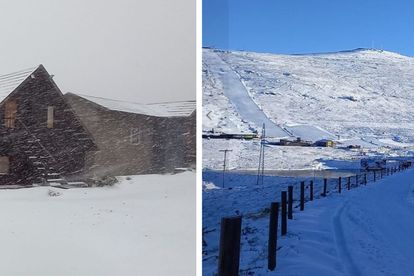 Bored? Why not go hunt for SNOW – Here’s where to see snow in SA this weekend Photos: Facebook

Bored? Why not go hunt for SNOW – Here’s where to see snow in SA this weekend Photos: Facebook

Are you bored and not sure how to keep the family entertained in the cold weather this weekend? Grab the family and go hunt for SNOW.

THE FIRST SNOWFALL WAS EXPECTED ON THURSDAY

The SA Weather Services (SAWS) said the first snowfall was expected to make landfall around midday on Thursday and will continue until Friday.

Here is where snow has been confirmed on Friday afternoon:

These are should have snow but by Friday afternoon the SAWS could not yet confirm if snow has made landfall:

“If possible stay indoors and off the roads, avoid crossing rivers and swollen streams where water is above your ankles. If trapped in a vehicle during a flood, abandon it and climb to higher ground. In buildings, move valuables to a safe place above the expected flood level. Stormwater drainage is full, so kids must stay away to prevent drowning.”