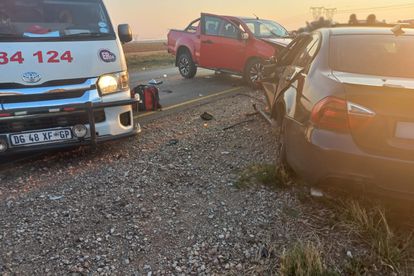 ER24 and other services arrived shortly after 18h00 to find the four vehicles in the left-hand lane and on the side of the road.

According to ER24, occupants from the four vehicles were seen seated on the side of the road.

Medics assessed the patients and found that one taxi driver was in a critical condition while thirty others had sustained minor to moderate injuries.

“Fortunately, no fatalities were found. The patients were treated, and the critically injured man was provided with advanced life support interventions before they were transported to nearby hospitals for further care.

“This incident’s details are unknown, but local authorities were on the scene for further investigations.”

ONE DEAD AFTER CAR CRASHES INTO BARRIER

On Thursday night, one man was killed and another injured when their light motor vehicle crashed into the roadside barriers on the Graceland Road in Secunda, Mpumalanga.

ER24 and the Provincial Fire Services arrived at 18h45 to find the vehicle on the side of the road. Part of the barrier had pierced the car, trapping the two men inside.

According to ER24, fire Services had to use specialised equipment to free the men. Once released, medics assessed the men and found that one man was in a critical condition while the other had sustained moderate injuries.

ALSO READ: Boksburg man killed in a hail of bullets, another injured