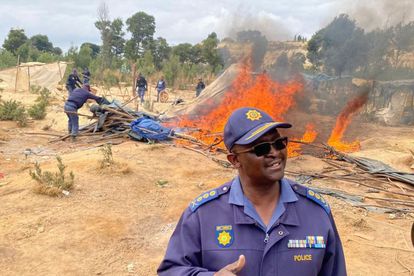 The body of an unknown man has been found in an open veld in Shamdor, Krugersdorp. Photo: @SAPoliceService / Twitter

The body of an unknown man has been found in an open veld in Shamdor, Krugersdorp. Photo: @SAPoliceService / Twitter

Police in Gauteng has confirmed that the body of an unidentified man has been found in Shamdor, Krugersdorp.

It is currently unclear if the man was killed during the protests in the area. The protests began as a number of community members voiced their frustration regarding illegal mining and undocumented foreign nationals in the area.

It was brought on by the horrific gang rape of eight women who were part of a crew shooting a music video near a mine dump in Krugersdorp. Police believe the suspects are illegal miners (zama zamas), reports SABC News.

Spokesperson for the SAPS Colonel Noxolo Kweza confirmed that the man’s body was found in an open veld. Kweza said that the motive and cause of death will form part of the investigation.

“Gauteng police can confirm that the body of an unknown man has been found in an open veld in Shamdor, Krugersdorp. The police have dispatched the necessary crime management team to the scene of the crime.”

“The motive and cause of death will form part of the investigation. Currently, police are monitoring the protest. The district Commissioner has called on protestors to engage with police to engage [restore] calm to the township,”

It was earlier reported that Kagiso residents continue on in their efforts to get rid of zama zamas in their community, reports eNCA. Some residents have even set fire to homes believed to belong to the illegal miners.

The protest efforts of Kagiso residents are a response to the tragic Krugersdorp rapes of last week. Footage from Scrolla Africa shows a shack in Kagiso burning while two people try to put out the fire with two buckets of water.

It is reported by the same account that the residents are burning the homes allegedly belonging to zama zamas.  Zama zama is a term used to describe illegal miners partaking in unauthorised mining activities. Read the full story here.