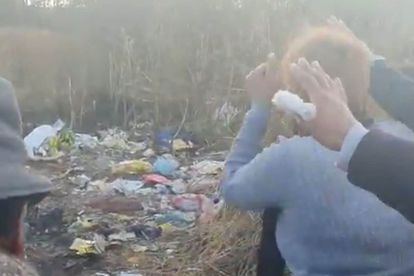 The body of a three-year-old girl has been found in a plastic bin in Orange Farm, Gauteng on Thursday 18 June.

According to police, the girl was stabbed in the upper body. She was reported missing on Wednesday 17 June.

Captain Kay Makhubela, on Thursday evening, told The South African that the body of a three-year-old girl was discovered by a passerby collecting plastic waste in Orange Farm.

“Today 18 June 2020 at about 06:00 a passerby person was collecting plastic waste when he noticed [the] body of a three-year-old girl in a plastic bin. He called the police,” said Makhubela.

No arrests have been made but a case of murder is under investigation. When asked if the girl was raped, Makhubela said it will be investigated.

In an utterly heart-wrenching video posted to social media on Thursday 18 June by Yusuf Abramjee, women can be seen gathering around the vacant site in Orange Farm.

Heartbroken that the body of an innocent child was found at the empty site, they held each other while crying.

“We cannot carry on this way. We pray for everyone that commits these heinous crimes, father. We pray that you’ll send them to the ends of the earth,” one of the women said.

‘THESE RAPISTS AND KILLERS WALK AMONGST US’

On Wednesday 17 June, while addressing the nation, President Cyril Ramaphosa said there is another pandemic apart from COVID-19.

“It is with the heaviest of hearts that I stand before the women and girls of South Africa this evening to talk about another pandemic that is raging in our country – the killing of women and children by the men of our country,” he said.

“These rapists and killers walk among us. They are in our communities. They are our fathers, our brothers, our sons and our friends; violent men with utterly no regard for the sanctity of human life,” he added.

Ramaphosa said no more than 21 women and children were brutally killed over the last few weeks.

The body of Tshegofatso Pule was found hanging from a tree in Roodeport. She was pregnant at the time of her death.

“We will speak for the innocent souls of Tshegofatso Pule’s unborn daughter who had already been given a name, six-year-old Raynecia Kotjie and the six-year-old child found dead in the veld in KwaZulu-Natal,” he added.