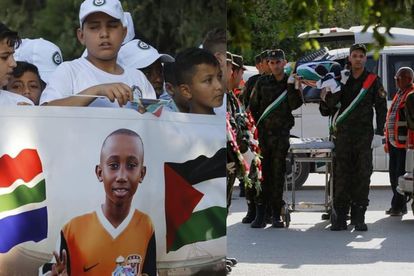 The body of a young talented player Kabelo Masalesa, who died in Palestine, is set to arrive in South Africa today, Sunday, 24 July.

The 11-year-old player had travelled to Palestine with his soccer team for a three-phased tournament where he accidentally drowned in a swimming pool.

The incident happened on Saturday night, 17 July and his body was discovered the next day (Sunday).

The talented player, who represented the Alexandra Northrand Local Football Association, was among 18 young players to be chosen to partake in this international tournament.

The Palestine Free Soccer Tournament was organised by the Palestinian Embassy and supported by the Department of Sports, Arts and Culture (DSAC).

“After receiving news of the tragic incident, DSAC and GDSACR focused attention on gathering details about the incident as well as reporting to Kabelo Masalesa’s family,”.

She added that further interventions for the family to travel to Palestine and secure the return of Kabelo to South Africa were made.

KABELO HAD A PROMISING CAREER

According to a family statement, Kabelo had just started his soccer career and was promising. According to reports gathered by the family, he drowned after their 2-0 win.

“The family is not in a space to blame anyone and took this as another accident that can happen to anyone. We will honour Kabelo by celebrating his life,” part of the statement read.

The family also praised the Palestine government for treating the repatriation process with honour and dignity.

“To the people of Palestine, SA Ambassadors to Palestine Mr Shaun Byneveldt, Governor of Jericho Jihad Abu al-Asal and President Mahmoud Abbas, thank you for the honour you gave our son Kabelo Masalesa. We are comforted. A hero was saluted,” Sello Mamabolo wrote on Facebook.