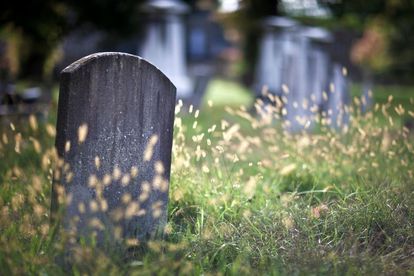 Police are seeking assistance from the public to identify the body of the elderly man found earlier this week in a graveyard in Vryburg.

THE BODY OF THE ELDERLY MAN WAS FOUND ON THURSDAY

According to police spokesperson Colonel Adele Myburgh the body of the man was found on Thursday.

She said the police would like to request community assistance in identifying the body of an unknown man who is about 70-years-old.

“He is about 1,58m in height, light brown in colour with a white beard. The man was wearing a blue overall with black boots.”

Myburgh said the inquest is currently under investigation.

Anyone with information that can assist the police is requested to contact D/Sgt Ebuang on 076 511 0489.

Meanwhile, the bodies of two women and a man were found in a canal in Kuilsriver on Thursday morning. All three bodies had gunshot wounds.

Police are investigating three murders after the bodies of two women, and a man was found in a canal in Kuilsriver on Thursday morning.

ALSO READ: Wife who hired a hitman to kill her husband was caught and arrested

SEVERAL SPENT CARTRIDGES WERE DISCOVERED IN THE VICINITY

According to police spokesperson Brigadier Novela Potelwa crime scene experts are sourcing a crime scene. The bodies were found in a canal in Sarepta, Kuilsriver.

“Reports from the scene indicate that police were called out at around 6 am, after passers-by spotted the bodies of two women and a man with gunshot wounds in the water.

“Several spent cartridges were discovered in the vicinity. Police divers responded and retrieved the bodies from the water.”

Anyone with information that could assist the police investigation is urged to contact police on 08600 10111 or convey information via My SAPS App. Information received will be handled in strict confidence.