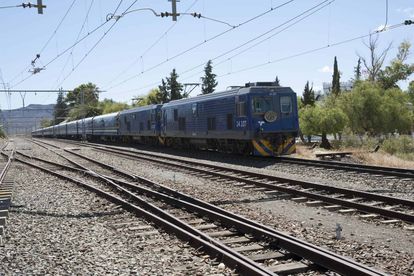 The Blue Train pulls in at Matjiesfontein in the Karoo. Image: Adobe Stock

The Blue Train pulls in at Matjiesfontein in the Karoo. Image: Adobe Stock

Transnet has reportedly suspended the operations of the luxury Blue Train from Monday until further notice.

Transnet said this was due to recent “unfortunate incidents.”

Last week, Transnet said it was investigating the cause of a fire which broke out in a coach of the Blue Train. The train was in for repairs at the company’s Engineering facility in Koedoespoort, Pretoria.

Transnet spokesperson, Ayanda Shezi said one person was apprehended by Transnet security personnel and handed over to the police.

“Two other people are still at large. The coach in question had been taken to Koedoespoort for repairs after being involved in a derailment last November.

WHY ALL THE FUSS ABOUT THE TRAIN?

In 2021, the Blue Train was named one of the ‘most luxurious train services’ in the world.

The Blue Train combines the luxury of the world’s leading hotels with the charm of train travel, and this makes for an unrivalled experience.

The train has two routes: The first of which travels some of the country’s most spectacular scenery between Pretoria and Cape Town, and the second travels to South Africa’s Limpopo province, which is home to the world-renowned Kruger National Park.

The Passenger Rail Agency of South Africa (PRASA) has on numerous occasions announced it was experiencing “unprecedented levels of vandalism and theft across all the regional Metrorail [commuter] and Shosholoza Meyl [intercity] services, resulting in massive disruption to commuter services, with vast sections being closed down.

Cable theft has been has been a major contributor to trains not operating. Between 4 and 11 February a total of 133 cable theft incidents were reported and only 16 suspects were arrested.

ALSO READ: Luxurious Blue Train derails, no passengers on board