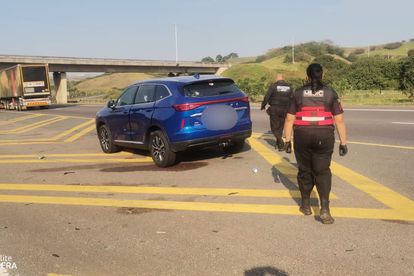 The driver of the bullet riddled blue Haval found on the N2 in KZN is yet to be located. Image: RUSA.

The driver of the bullet riddled blue Haval found on the N2 in KZN is yet to be located. Image: RUSA.

The driver of the bullet riddled vehicle in which a body of a 46-year-old man was discovered on the south bound lane of the N2 in the vicinity of Sibaya Casino & Entertainment Kingdom in KwaZulu-Natal on Sunday has not been located.

The caller also informed the controller on duty that a passenger in the vehicle was shot and appeared to be deceased.

RUSA spokesperson, Prem Balram said reaction officers and medics were immediately dispatched to the location provided and on arrival examined the male.

Balram said the man had sustained gunshot wounds to his chest and head which resulted in his demise. His belt was unfastened and the button on his jeans and zip were reportedly open.

“A firearm permit for a CZ75 pistol issued to the deceased by the Department Of Health was located in the vehicle. The firearm was not in his possession and it cannot be confirmed it had been stolen.

“A second identification card belonging to a female who is a registered nurse with the Department Of Health was also located. She is believed to be the driver. Her whereabouts are unknown at this stage. The surnames on both identification cards were the same.”

The vehicle had been shot multiple times from the rear and passenger side. Several spent 9mm cartridges and a single rifle cartridge  were recovered.

An open beer bottle and four sealed beers were  located inside the car, reportedly.

“The motive for the murder has not been established at this stage,” Balram said.