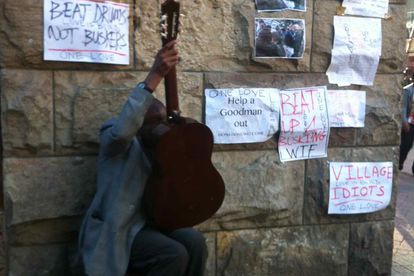 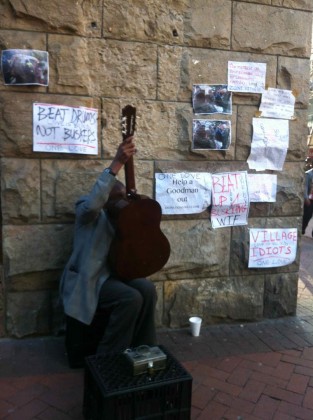 A tourist magnet in his own right on account of his unique technique of playing the guitar, Nono has posted newspaper cut-outs and placards of support produced since the incident on the wall behind him. Judging by his passion for his music it might be fair to say that he doesn’t appear to be going anywhere.

Nono and his wife Abigail were forcefully removed and held in police custody after refusing to stop performing outside allocated busking times. Nono had reportedly been in repeated breach of city regulations governing busking activities, and had shown blatant disregard towards police patrolling the streets in the City Bowl district.

The aggressive removal of the blind musician from his regular street corner on St. George’s Mall earlier in July nonetheless managed to attract international media coverage. Whether or not the story serves as yet another example of excessive police force in South Africa is unclear at this point. The City of Cape Town has launched an investigation to assess the case, largely relying on CCTV footage from the arrest but most public opinion as well as opposition party views seem to be in favour of Nono, as public support for the SAPS continues to fall, especially after last year’s massacre at Marikana.