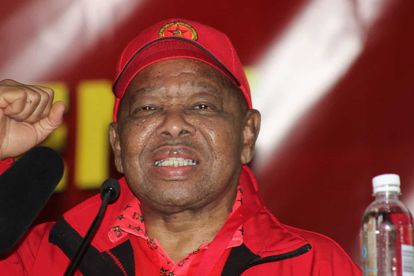 South African Communist Party (SACP) general secretary and Higher Education, Science and Technology Minister Blade Nzimande has said the party will do everything in their power to ensure that the killer of former SACP leader Chris Hani, Janusz Walus, stays behind bars – unless he reveals who else was involved in the 1993 killing.

Speaking during the conclusion of the party’s special congress on Thursday, Nzimande said: “Janusz Walus must rot in jail unless he speaks the truth and nothing but the whole truth as to who he was working with to plan and execute the assassination of our late general secretary Comrade Chris Hani.”

He made the remarks on the same day the Pretoria High Court ordered Justice and Correctional Services Minister Ronald Lamola to review his decision not to grant him parole within 60 days.

Walus must ‘rot in jail’

“The 60 days is the key side of struggle now. It means as a party we need to be reaffirming our position that Janusz Walus must rot in jail, unless he speaks the truth and nothing, but the whole truth as to who was he working with to plan and execute the assassination of our late general secretary,” Nzimande further said.

Judge Jody Kollapen set aside a decision by Lamola’s predecessor, Michael Masutha, in which he refused to grant Walus parole.

Lawyers for the convicted murderer had wanted the court to order his release. However, Kollapen said it was not the court’s mandate to take over the role of administrators.

“The administrator is generally the best equipped by experience, as well as access to resources and information to make such decisions. It also accords with the principle that underpin the separation of powers doctrine,” the judge said.

In March 2016, the Pretoria High Court ruled that Walus should be released on parole. The Justice Ministry, lead by Masutha, subsequently approached the Supreme Court of Appeal in Bloemfontein, seeking to overturn his parole.

The SCA then ruled in favour of Masutha, a decision welcomed by the SACP.

The then minister had announced earlier in 2019 that he would not be granting Walus parole, as there had been conflicting information which made it difficult to determine whether he should be allowed to walk free.

Who was mastermind behind Chris Hani’s assassination?

Walus, a Polish national, assassinated Hani outside his Boksburg home, shooting him four times on Easter Saturday 10 April 1993, on the eve of South Africa’s transition to democracy in 1994. Hani was declared dead at the scene.

Authorities managed to capture Walus after a neighbour noted the registration of the car he fled the scene in. It was later revealed during the course of the investigation that former apartheid-era MP Clive Derby-Lewis was the mastermind behind the plot.

The pair was later sentenced to death. However that was later commuted to life imprisonment after South Africa abolished the death penalty.

In 2015, after several unsuccessful attempts, Derby-Lewis, then 79 and suffering from terminal lung cancer, was granted medical parole. He died in 2016.