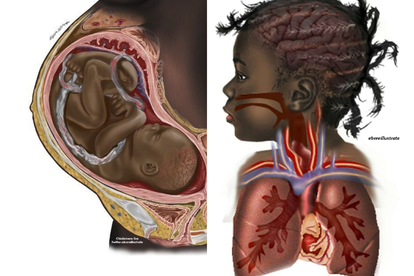 As we’ve forever seen, medical media and biology textbooks largely feature white- to pale-skinned bodies, which suggests the idea that white is the default.

This was until Chidiebere Ibe, a medical illustrator and neurosurgeon student, shared the artwork of the Black fetus with the caption, “I’m black, and black is beautiful! Diversity in Medical Illustration.

“More of this should be encouraged!” he added. Little de he know he was going to get the world’s attention, and oh boy he went viral.

So’ what’s exactly viral these days? Well, Ibe’s black illustration for medicine post was shared by NBC News before receiving 41 000 retweets and nearly 170 000 likes on Twitter as of Monday morning.

“I wasn’t expecting it to go viral. I was just sticking up for what I believe in, advocating for equality in health through medical illustrations,” he told the news outlet.

“I made a deliberate action to constantly advocate that there be inclusion of Black people in medical literature.”

HOW IT STARTED FOR IBE

The 25-year-old Nigerian’s online illustrations did not exactly start last week. Ibe has been quietly applying his creations for more than a minute now.

According to the report, he started publishing on social media several months ago before his fetus illustrations became the hit.

“The post was retweeted more than 50,000 times, and the illustration garnered more than 88,000 “likes” on Instagram and even made its way to TikTok. Ibe drew praise from medical professionals far and wide.

“Little did I understand what the drawing meant to a lot of people,” Ibe said.

“On my LinkedIn, on my Twitter, on my Instagram, I read the comments and they really touched me. I was crying,” Ibe said. “It was amazing to see how good people felt about it. People could see themselves in the drawing.”