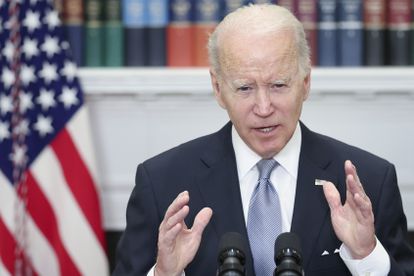 US President Joe Biden announced Thursday a new package of $800 million in military aid for Ukraine, saying it would help Kyiv in the fight against Russian forces in the Donbas region.

The Pentagon said the newest round of US support will include 72 155mm howitzers, 72 armored vehicles to tow them, 144 000 rounds of ammunition, and more than 120 “Phoenix Ghost” tactical drones recently developed by the US Air Force specifically to address Ukraine’s needs.

Biden said the new package was tailored to help Ukraine’s forces address the growing Russian offensive in the country’s east, which he said would be a different kind of fight than that in the north around Kyiv, where Ukrainian forces successfully beat the Russian invasion back in the first six weeks of the war.

ALSO READ: President Ramaphosa and President Zelensky “on the phone”

“We’re in a critical window now of time where that they’re going to set the stage for the next phase of this war. And the United States and our allies and partners are moving as fast as possible to continue to provide Ukraine … the weapons their forces need to defend their nation,”

Biden also announced that Russia-affiliated ships would be banned from US ports, and that the US Treasury was putting up a fresh $500 million for Ukraine’s government so it can pay salaries and pensions and provide services.

He said unity between the US and allies in support of Ukraine is sending “an unmistakable message” to Russian President Vladimir Putin.

“He will never succeed in dominating and occupying all of Ukraine. That will not happen,” Biden said.

Ukrainian President Volodymyr Zelensky, who has pushed strongly for more and heavier weaponry, said in a tweet that he was grateful for Biden’s announcement.

“This help is needed today more than ever! It saves the lives of our defenders of democracy and freedom and brings us closer to restoring peace”

in Ukraine, he said.

Biden calls for a Need to maintain unity

Biden pledged that US military aid for Kyiv will not dry up, and said he was preparing to ask Congress for more funds “to keep weapons and ammunition flowing without interruption.”

He called on allies to continue their support.

“We have the capacity to do this for a long time. The question is, are we going to maintain the support of the international community to keep the pressure on Putin” and keep enforcing tough sanctions on Russia, he said.

“The most important thing is maintain unity,”

The new package follows $800 million in military assistance announced by the White House last week, taking to $4 billion the amount the US has put up in arms and supplies for Ukraine’s forces since the start of the Biden administration in January 2021.

Numerous allies in Europe have also supplied Ukraine with weapons and military supplies.

The $500 million announced by the Treasury doubles the amount of direct US economic assistance to Kyiv since Russian forces invaded.

Biden said the money is meant to help the government stabilise the economy, support devastated Ukrainian communities, and pay government employees to continue their work.

Commenting on the progress of the war, Biden said it was unclear if Russia had taken control of Mariupol , the southern port city which has been devastated under weeks of a heavy Russian offensive.

Earlier Thursday Putin claimed the “liberation” of the flattened Ukrainian city, even as an estimated 2 000 Ukrainian soldiers remain inside a giant Mariupol steel plant sheltering in a network of underground tunnels.

“It’s questionable whether he does control Mariupol. He should allow humanitarian corridors to let people… get out.”

“There is no evidence yet that Mariupol has completely fallen.”

Biden ‘s announcement of a ban on Russian ships in US ports matched an earlier similar ban by European allies.

ALSO READ: Can Biden turn his ship before midterms storm?

He said it would apply to any Russian flagged vessel and vessels owned or operated by Russian interests.

Meanwhile, the government gave details on the previously announced decision to accept 100 000 Ukrainian refugees, saying they will require US sponsors and should seek to obtain visas from Europe rather than making their way directly to US borders.