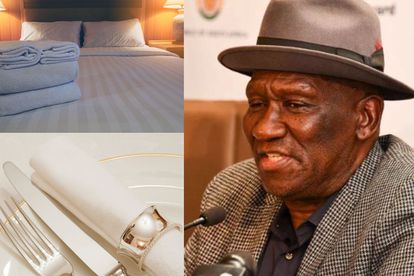 Wait, what?! It was recently revealed that Police Minister Bheki Cele spends R600 million a year on food and accommodation when he goes on official trips.

This would include visiting murder scenes of victims he chooses at his prerogative.

Cele made it clear earlier this year that it is his own prerogative which funerals and crime scenes he attends.

His spokesperson Lirandzu Themba told The South African Cele and SAPS management also attend most if not all official SAPS funerals.

According to DA Shadow Minister of Police, Andrew Whitfield, Cele revealed that his department had spent over R1.5 billion on accommodation and R42.7 million on catering since March 2019.

SOUTH AFRICANS ARE CLEARLY FED UP WITH CELE

“The DA accepts that accommodation costs include the legitimate cost of housing SAPS members away from their ordinary duties, but the exorbitant amount must be investigated by the portfolio committee on police. It is simply outrageous that SAPS is spending over R1.4 million per day housing SAPS members.

“It is unconscionable that more than R1.5 billion can be spent on accommodation and R42.7 million on catering, when every year the SAPS reduces its front line personnel, detectives, and reservists while South Africans are murdered, maimed and raped.”

Whitfield furthermore wanted to know what more does Cele need to do in order for President Ramaphosa to fire him?

“South Africans are sick and tired of his incompetence and disregard for them. It is time that Cele must go.”

Meanwhile, the petition to have Cele removed is still ongoing

ALSO READ: Petition to have Bheki Cele removed from the cabinet -gains momentum

TEN REASONS GIVEN FOR CELE’S REMOVAL:

10 Reasons why Cele must go: