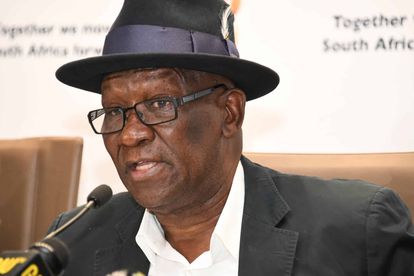 In the pic: Minister of Police General Bheki Cele. Justice, Crime Prevention and Security (JCPS) Cluster Ministers briefing members of the media on state of readiness for the sixth General Elections during the media briefing held at Ronnie Mamoepa Media Room, GCIS in Pretoria. 02/03/2019. Ntswe Mokoena

In the pic: Minister of Police General Bheki Cele. Justice, Crime Prevention and Security (JCPS) Cluster Ministers briefing members of the media on state of readiness for the sixth General Elections during the media briefing held at Ronnie Mamoepa Media Room, GCIS in Pretoria. 02/03/2019. Ntswe Mokoena

The Democratic Alliance was hindering the fight against crime in the poor parts of the Western Cape province by pouring more resources into wealthy suburbs, Police Minister Bheki Cele suggested in Parliament.

Cele said police were coming under fire in the dissolute communities of the Cape Flats because, unlike in the leafy areas, there were no street lights and closed-circuit television cameras were allowed to fall into disrepair for years.

“There is no paradise Western Cape here. Let’s go to Khayelitsha, let’s go there. There is darkness, there are no lights in Samora Machel. If you go to Bishop’s Court, to Hout Bay, it is forever daylight, the cameras are all working,” he said in the debate on President Cyril Ramaphosa’s state of the nation address in the National Assembly.

“If you go to Site C, the police will be shot… the camera in Khayelitsha is eight years not working,” he added.

Cele said if the DA wanted to improve the lives of people in the Western Cape, the only province where it is in power, it needed to make sure that there were security cameras in these areas.

Earlier this month, six members of the police’s Anti-Gang Unit were shot on the outskirts of Samora Machel township as a gang war, believed to be fueled by the battle for control of the drug trade, wages on the Cape Flats.

Dispute over allocation of resources

The minister and the provincial authorities are locked in a dispute over policing resources for the province.

Alan Winde, now premier of the Western Cape, in April declared an inter-governmental dispute with the minister after claiming that Cele had repeatedly failed to respond to his correspondence outlining the need for greater policing resources in the province.

Cele met with the MEC for community safety Albert Fritz last week and agreed to negotiations about the equitable distribution of resources.

But on Tuesday Cele told fellow MPs the DA was responsible for the social environment in which crime flourished and its disrespect for the poor was evident in its failure to provide the poor with flushable toilets.

“It is the only province where people carry their toilets like they carry their bags… don’t tell us how you rule better.”