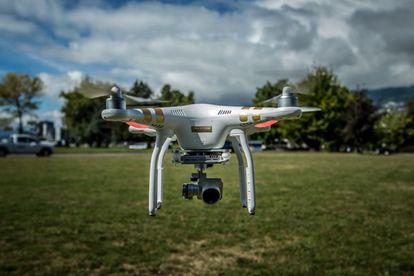 Government is currently working on obtaining 166 drones that will be distributed across 43 districts as part of a rural safety strategy. Photo: Alan / Flickr

Government is currently working on obtaining 166 drones that will be distributed across 43 districts as part of a rural safety strategy. Photo: Alan / Flickr

43 districts will be covered by the drones

This statement by Cele was presented in response to a written question by the Freedom Front Plus (FF+). The party wished to know if the South African Police Service (SAPS) acquired any drones to be used for rural security.

The distribution of the drones within the SAPS will follow a three-phase process and cover 43 districts.

The utilisation of drones has already been launched in Johannesburg for police services. The distribution of the 166 drones will mark the start of the widespread use of drones within the policing strategy, reports SABC News.

In other news, it was previously reported that the Democratic Alliance in Gauteng says the 4th quarter report of the 2021/2022 Crime Stats indicates that the safety and security of the Gauteng residents remain at risk, and they have a bleak future ahead of them

Police Minister, Bheki Cele presented the crime stats in Pretoria on Friday, 3 June. Gauteng police stations are dominating in the top 30 of all crime stats across the country, with a notably sharp increase in crimes like hijackings, kidnapping, murder, and sexual offences.

From January 2022 to March 2022, a total of 1403 murder cases, 2936 hijackings and 2267 cases of sexual offences were reported. The DA in Gauteng said the number of cases reported for murder, hijackings and sexual offences is devastating and shows that the lives and livelihoods are in danger. Read the full story here.