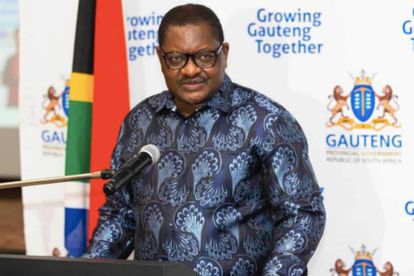 David Makhura has come out guns blazing against those that allegedly launched a Bell Pottinger-type smear campaign against him for fighting against corruption.

Makhura firmly addressed the issue while providing the media with the weekly COVID-19 update on Friday 5 June.

Let’s start at the beginning, shall we?

Makhura was accused of having ties to a businessman by the name of Hamilton Ndlovu. Allegations came to the forefront on social media that Makhura had “blessed” Ndlovu with a R100 million Personal Protective Equipment (PPE) tender.

Makhura, however, has cracked down on the allegations, saying that neither Gauteng Health MEC Bandile Masuku had any relations with Ndlovu. Makhura said they had never met him in the first place.

On Friday, blood boiling, Makhura let loose on the accusations. He said:

“We want to send a strong message to the corrupt business people and their agents in government. Your smear campaign will not stop us from fighting corruption. We are coming for you, one department after another.”

“Bell Pottinger-type tricks and lies will not save you. You will go to jail before you kill us,” said Makhura.

Makhura said the smear campaign was launched by the “beneficiaries of corruption to intimidate, silence or destroy those who are opposed to corrupt deals.”

“Their mantra is: ‘if you can’t buy them, destroy them,” added Makhura.

The Gauteng province has, according to Makhura, been promoting local manufacturing of PPE and supporting local entrepreneurs, especially those previously excluded from the mainstream of the economy.

“More than 80% of procurement is from companies that are owned by black business people. We have been insisting on prudent and clean procurement of PPE,” he added.

Makhura also mentioned that as part of risk management, the Gauteng Provincial Treasury, through Gauteng Audit Services, will undertake regular internal audits and reviews of all major procurement processes of PPE, food and related infrastructure in order to ensure clean governance.

Makhura made the following points: