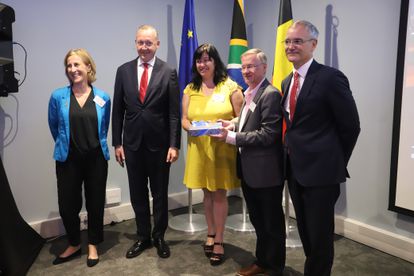 Trade & Investment KwaZulu-Natal (TIKZN) hosted a Belgian delegation aimed at showcasing the advantage to local companies of using Belgium as a gateway to Europe.

The event targeted South Africa exporters who want to streamline their operations in Europe, either by setting up a distribution centre in Belgium, or by partnering with Belgian local logistics players.

Stemming from the excellent sister city relationship between Durban and Antwerp in Belgium, a delegation of seven high-level government officials and business leaders from Belgium visited KZN to discuss various areas of cooperation including trade and economic development.

Trade & Investment Advisor at Wallonia Export & Investment Agency, Julie Tirtiaux welcomed the guests and TIKZN Manager at the Gauteng Office, Donnee Kruger, led a discussion on the competitive and comparative advantages of investing in KwaZulu-Natal.

“The plans to modernise the Port of Durban are aimed at improving its efficiency and reclaim its status as the best-performing port in Africa. This will help the port perform its role of anchoring economic growth and serving as a gateway to Southern Africa and the entire continent,” Kruger said.

Foreign trade is the lifeblood of the Belgian economy, and Belgium is also among the top 10 recipients of foreign direct investment in the world. Bilateral trade between South Africa and Belgium is thriving. Belgium is South Africa’s 12th customer, with total exports from South Africa to Belgium totalling R36.92bn in 2020.

Van Der Hasselt said that the delegation’s visit was a great opportunity for Belgium to strengthen trade relations with KZN. “Belgium provides a  good connection to the rest of Europe, a thriving entrepreneurial environment, and more than 500 million consumers within a radius of 800km. The economic fabric of Belgium mainly consists of SMMEs with a remarkable ability to fuel economic growth and create new job opportunities,” Van Der Hasselt said.

The European Union, as a bloc of 27 members, is the world’s largest single market and also South Africa’s most important trading partner, providing 30% of the country’s total imports and accounting for 24% of exports.  At the very heart of the European Union, there is Belgium, one of the most dynamic and open economies in the world.

Growing the local economy and creating employment opportunities remains the core of the economic recovery and reconstruction and recovery plan in KZN.