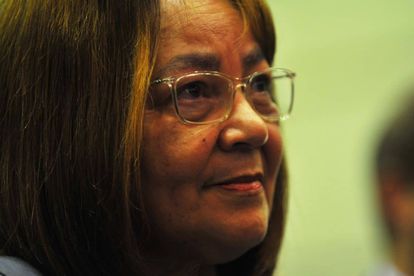 Patricia de Lille takes the stand at the Durban High Court to testify against Schabir Shaik, a Durban businessman who was charged with fraud and corruption charges. (Ziyaad Douglas / Gallo)

Patricia de Lille takes the stand at the Durban High Court to testify against Schabir Shaik, a Durban businessman who was charged with fraud and corruption charges. (Ziyaad Douglas / Gallo)

The latest SIU report on the Beitbridge border fence saga has included a long list of irregularities. Based on that, the SIU has put forward recommendations for the Department of Public Works.

While the department has been ordered to take action and implement the relevant recommendations, the SIU will approach the Special Tribunal in order to cancel the contract and recover the losses incurred by the State. At the same time, National Treasury’s report has also raised a few red flags. The Democratic Alliance (DA), following the reports, believes Minister of Public Works and Infrastructure Patricia De Lille is implicated in wrongdoing and should be fired for her actions… or lack thereof.

National Treasury has recommended that the emergency procurement on the fencing at the Beitbridge border post be investigated.

On Monday the 16 March 2020 De Lille issued a directive to the Director-General of the department, directing him to appoint a service provider using emergency procurement processes in relation to the erection and repair of the Beitbridge border fence. According to the minister, the purpose of issuing the directive was to secure the border in order to prevent the spread of COVID-19.

The  SIU investigation revealed procurement irregularities perpetrated during the infrastructure delivery process, as well as possible acts of fraud. The irregularities identified include:

Total cost of the project

Breaches of the Beitbridge border fence

“National Treasury and the Special Investigation Unit (SIU) presented damning findings before Parliament’s Portfolio Committee on Public Works and Infrastructure today which suggests that Minister Patricia De Lille was much more involved in the procurement of the Beitbridge ‘Washing Line’ than she has previously admitted,” said DA Shadow Deputy Minister of Public Works and Infrastructure Samantha Graham-Maré.

According to the DA, these findings not only implicate the minister but also gives Ramaphosa enough evidence to fire her.

The party quoted Treasury as saying; “[it] is not clear which contract the Minister instructed to be varied […] it would seem the Minister had a contract, supplier or contractor in mind. “[In] terms of separation of powers, the Executive Authority, must not interfere in administrative functions”.

“This confirms information in the Democratic Alliance’s (DA) possession regarding the Minister’s instruction for a variation order for the appointment of a contractor,” said Graham-Maré.

The DA said the variation order was seemingly pursued to ensure that the specific contractor, Magwa Construction was appointed.

“While this process was later aborted, the contractor was still appointed via an accelerated procurement process. The DA is of the view that Treasury’s findings implicate Minister De Lille to the extent that she unduly interfered in the procurement process for the fence and that this makes her complicit in the corruption that took place. President Ramaphosa should do the right thing and fire Minister De Lille,” she added.