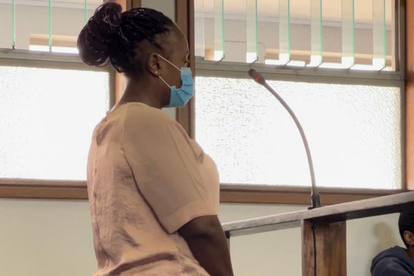 What are courts without drama? Bathobile Mlangeni, once a security guard at SBV, surprised the court on Monday by saying no thanks to a bail application opportunity.

As widely reported in local media over the past two years, the former SBV security guard was arrested as we got into the new year this month.

Dressed carefree in jeans, a pink top, and white sneakers, the 31-year-old was distant as her lawyer simply revealed that Mlangeni was not pursuing bail.

The suspect was wanted for allegedly stealing a staggering R4 million in 2019. According to the story, she had cut open a bag of cash, placed the loot into refuse plastic bags, before moving it out of the Mall of Africa in 2019.

ON THE RUN FOR TWO YEARS

Mlangeni was on the run for two years, all while images of her had been published in the media. Her freedom was ended when police received a tip-off that she was not far away at all. The cops were told she was just in Zola, Soweto.

“It was said she appeared to be struggling for cash. None of the R4m has been recovered,” TimesLIVE reported.

Meanwhile, Mlangeni is now expected back in court on 18 February.

“Masebeni was successfully traced and arrested in Queenstown in the Eastern Cape on Wednesday, 19 January. He was charged with theft and appeared in Queenstown Magistrate’s Court the following day. The court remanded Masebeni in custody pending investigation.” Read the full story here.