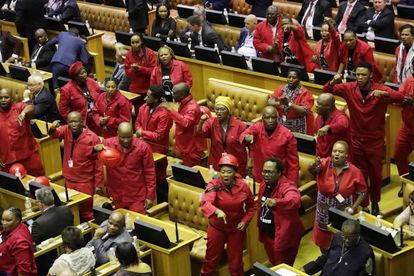 In her closing arguments, initiator Advocate Ncumisa Mayosi told the powers and privileges committee there was “overwhelming evidence against the EFF MPs” before she found them guilty for breaking parliamentary rules and the Powers and Privileges Act.

The guilty verdict against the EFF MPs comes after video and oral evidence was presented to the committee last month.

Grace Boroto, who presided over the sitting, also gave evidence, saying that she didn’t know what the intentions of the EFF MPs were, fearing they would attack Gordhan.

Punishment to be meted out in 2021

Mayosi said that the matter was now up to the committee to decide on how to act against the MPs, with Parliament saying it’ll decide only next year on how to punish the EFF MPs found guilty of accosting and disrupting Gordhan.

EFF MP and committee member, Mbuyiseni Ndlozi, requested a copy of the ruling before calling on the meeting to adjourn until next year.

“I think that we should receive the submission in writing, it will make our deliberations efficient and I think that we must accordingly adjourn the meeting, seeing that there will not be a quorum,” he said.