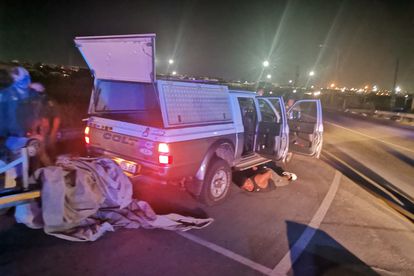 A 26-year-old suspect was arrested on Wednesday. Photo: SAPS.

A 26-year-old suspect was arrested on Wednesday. Photo: SAPS.

A 26-year-old man is facing serious charges after leading the police on a high-speed chase in the Eastern Cape in the early hours of Wednesday morning, 9 February. Warning shots were fired before the chase came to an end.

Members of the Gqeberha K9 Unit were patrolling the Summerstrand area when they noticed a bakkie slowly rolling along with its headlights off near the Kings Beach parking lot.

When the police entered the parking area, the bakkie driver sped off, said van Rensburg.

“A chase ensued and backup was requested. Various stations and response vehicles joined in the chase and attempts to stop the double cab Colt LDV bakkie proved difficult…”

According to the police report, the suspect headed towards the Algoa Park area and ignored traffic lights during the escape attempt.

SHOTS WERE FIRED AND THE BAKKIE CAME TO A SUDDEN HALT

As the bakkie driver approached his would-be destination, the police closed in and he allegedly attempted to force SAPS vehicles off the road.

Van Rensburg said warning shots were fired and the vehicle came to a halt at the Chatty dip.

The driver was taken into custody and charged with attempted murder, reckless and negligent driving and failure to comply with SAPS instruction.

Both the suspect’s bakkie and trailer were impounded and he is expected to appear before the Gqeberha Magistrate’s Court imminently.