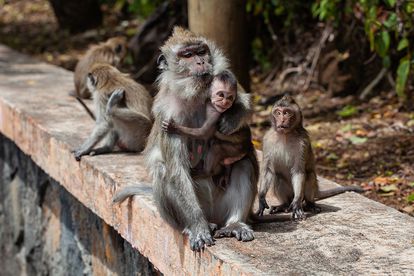 A baby has died after he was attacked by monkeys. Image: Pixabay

A baby has died after he was attacked by monkeys. Image: Pixabay

A one-month-old baby boy has reportedly died in Tanzania after he was snatched by a monkey while his mother was breastfeeding him.

A troop of monkeys reportedly entered the baby’s home in Mwamgongo village in Kigoma, near the Gombe National Park in western Tanzania. The incident reportedly happened on Monday, 20 June.

BABY DIES AFTER BEING SNATCHED BY MONKEY

Kigoma Regional Commander James Manyama told a publication in Tanzania that  the child died after villagers tried to use force to rescue him from the monkey.

Manyama said the mother screamed for help and villagers rushed to her house to try and assist her in getting her child back from the troop of monkeys.

The baby was injured on the head and neck, and later passed away as he was receiving treatment.

Manyama told the BBC that in his three years of working in the area he had never heard of a similar incident. However, incidents of larger wild animals, such as elephants, encroaching on the land of villages near national parks and resulting in some deaths have been known.

In a separate incident, earlier this year, a Pastor from Amanzimtoti in KwaZulu-Natal was heavily criticised for boasting on Facebook that his dogs killed three vervet monkeys, which were disturbing his peace.

“Today is a day like the Olympic opening ceremony for me. We have had a tribe of monkeys terrorising our dogs for months. Two days ago, one of these velvet (sic) barbarians, while teasing the four daschunds, accidentally fell from the gutter. Needless to say it was a massacre. As luck would have it two friends tried to save the unlucky fellow. We buried the remains of all three of the velvet (sic) offenders,” Fannie Hennop wrote.