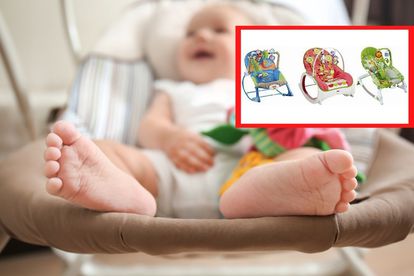 These rockers are also for sale in South Africa.

According to a report by CNN this shocking statement was made by the US Consumer Product Safety Commission and announced by Fisher-Price.

According to the American Academy of Pediatrics, infant rockers are designed to gently swing back and forth, thus providing a soothing, calming motion to relax babies.

Other types of baby products that have an incline include baby bouncers, infant positioners and inclined sleepers, also known as baby nests, docks, pods, loungers, or nappers.

“Inclined sleepers allow babies to sleep at a 30-degree angle. Infants placed in these products may fall asleep in a chin-to-chest position, which can restrict their airway. They can also roll out of the devices and become trapped under them. Inclined sleepers have been tied to at least 94 deaths.

“With sleep positioners, babies can suffocate after rolling onto their stomachs since they can’t lift their heads. The soft padding can make it difficult to breathe if a baby’s face presses against it.”

Trumka Jr said no inclined product made by Fisher-Price or any other company is safe for infant sleep. Only a firm, flat surface is safe.

“Infants who fall asleep in an inclined or upright position should be moved to a safe sleep environment with a firm, flat surface such as a crib, bassinet or play yard.”

ALSO READ: WATCH: Search STILL on for the boy who fell into ‘open manhole’