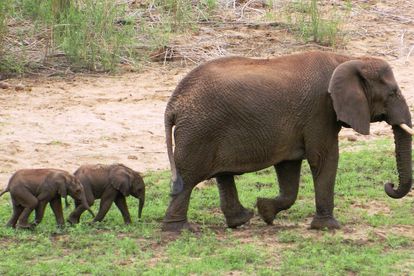 On 4 December, Curve and Ingani gave birth to a twin in Northern Kwa-Zulu Natal. This would be an otherwise normal occurrence if Curve and Ingani were not African elephants, and if scientific evidence did not suggest that there is less than one percent prevalence of elephants twinning.

31-year-old Curve (so named for the curve of one of her tusks) has not let anyone near her babies since their birth at Pongola Game Reserve. She has being given enough space and a fighting chance to beat the mortality odds for the twins, as there is unfortunately very little chance of both twins surviving into adulthood. Elephant calves weigh about 100kg at birth. Although twins would probably be lighter individually, they would still need a great deal of milk from their mother.

Elephant specialist and retired Kruger National Park Project Manager, Dr. Ian Whyte explains that Curve needs a stress-free environment as “mortality of one of the twins usually occurs as the increasing demand for milk by two calves cannot be met by the mother and the less dominant of the two calves usually cannot gain access to its share”. 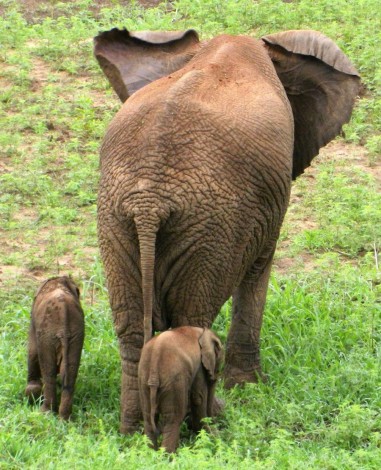 There are a very few records of twins being born to Asian elephants in Thailand and Nepal.