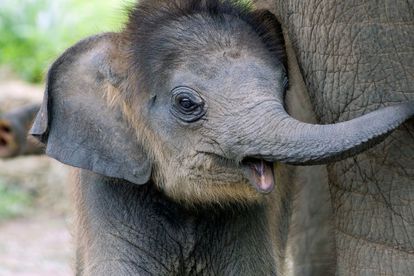 A Kruger National Park ranger shot a baby elephant, still suckling from its dead mother, despite an offer of sanctuary because of its national park policy.

THE SEARCH FOR THE WOUNDED BABY WAS CALLED OFF

The wounded baby elephant’ bleeding from his mouth’ ran into the bushes.

According to the Park’s communication officer, Ike Phaala, rangers searched for the wounded baby elephant but confirmed that the baby’s carcass was never recovered.

“As a SANParks principle, human intervention is not permitted with regard to abandoned or orphaned animals unless the cause is clearly anthropogenic in origin. An abandoned animal may not be ‘rescued’ and brought in for care and rehabilitation. This applies particularly to large animals and, or, animals which are potentially dangerous to humans.”

He further said the elephant cow did not die as a result of human activity or causes (as is the case when an animal is snared or poached), and therefore, the elephant calf was not considered for “rescue.”

“As it was still suckling, it had no chance of survival on its own, and either would have been killed by predators that night, or it would have died a slow death from starvation. The humane decision was to put it down and prevent further suffering.”

This has, however, raised concerns and questions about these conservation protocols as a sanctuary has spoken out about this incident saying they were ready and able to rescue the baby at their own cost.

According to the sanctuary, the chances of the baby that young surviving is more than 80%.

“We would have rehabilitated and then introduced the baby to the herd. There was no problem on our side.”

According to a media report, Adine Roode of the Hoedspruit Elephant Rehabilitation and Development Trust (Herd) said she received a call from Dr. Johan Marais, the wildlife vet of Saving the Survivors.

He informed her of the baby elephant, about a year old, trying to suckle still after his mother dropped dead in the Kruger National Park.

Herd reportedly has protocols in place for incoming crisis calls.

ALSO READ: 249 rhino poached in SA since the start of 2021 and it is increasing

“The sanctuary must be prepared for moments like this. There’s an emergency kit already packed to go with the vehicle to collect the baby. This is a moment of extreme urgency. When rescuing an orphan, every minute counts. There needs to be as little human interaction as possible to lessen the calf’s terrible stress.”

Marais reportedly informed the Kruger National Park that Herd is standing by with permits and will collect the baby elephant at their own expense. He offered to do the darting at the expense of Saving the Survivors.

This is to ensure that the baby is rescued quickly and placed in safe hands.

According to the media report Roode briefed her staff.

“Action mushrooms. Everyone knows what to do. Her carers move with focus. The nursery must be prepared.”

She was waiting for instructions when the second call came in to inform her that the decision was made to shoot and kill the baby elephant.

Marais informed Roode that the baby elephant was shot but that it was running and bleeding from the mouth.

A HERD HEARD THE BABY’S DISTRESS

It is believed the nearby herd has heard the baby’s distress. They start trumpeting, heading towards the cries, shaking the trees in response to the calf’s trauma. The calf, which has fallen, managed to stand, and it ran into the bush.

The tracking of the wounded calf started, but Phaala confirmed that the search was called off because it was now dark and too dangerous to continue.