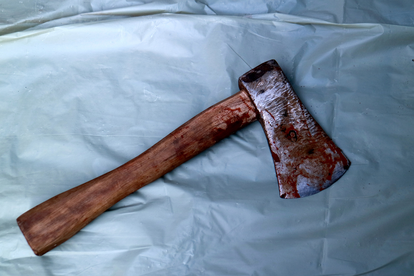 A man was found guilty and sentenced after he brutally hacked an older man to death with an axe in North West. Photo: Stock/ Canva

A man was found guilty and sentenced after he brutally hacked an older man to death with an axe in North West. Photo: Stock/ Canva

A 37-year-old man was sentenced to life behind bars after he was found guilty of brutally hacking an older man to death on Sewefontien Farm, near Bloemhof.

HERE IS ALL THE INFORMATION ABOUT THE BRUTAL AXE MURDER:

According to police spokesperson Colonel Adéle Myburgh the man, Ofentse Andries Konjo, appeared in the Bloemhof Regional Court on Thursday.

“On Saturday, 27 March 2021, a 50-year-old man was reported missing by his family. During police investigations, witnesses who were minors came forward and explained how their own father (Konjo) killed the victim with an axe on Sewefontien Farm, near Bloemhof,” she said.

Myburgh said the minors further pointed out an old grave on the farm where the victim was buried.

THE VICTIM WAS BURIED AFTER HE WAS HACKED TO DEATH

“Konjo was ultimately arrested on Wednesday, 5 May 2021, and appeared in the Bloemhof Regional Court the same day. The court did not grant him bail, and he remained in custody until he was sentenced.”

It was a joyous week in North West as several criminals were found guilty and sentenced to numerous murders in Bloemhof.

“This verdict came after police who were on patrol met Tau, holding her boyfriend, Piet Tsimanakwe Wageng (38) in her arms, with a stab wound on his chest in the early hours of Monday, 20 July 2020 at Protea Street, Bloemhof.

“She alleged that her boyfriend was stabbed by two unknown men who fled the scene.”

Emergency Medical and Rescue Services (EMRS) paramedics were immediately summoned and took Wageng to the Bloemhof Community Health Centre where he died shortly after arrival.

She said police investigations revealed that Tau and Wageng had an argument at his place whilst in the company of friends.

Tau, during the argument, pushed Wageng outside the house and stabbed him.

Myburgh said sentencing, in this case, is expected soon.

The Provincial Commissioner of North West, Lieutenant General Sello Kwena, applauded the Bloemhof Investigating Officers and all other role players, including prosecution, for their diligence in ensuring that the accused are convicted, which he said will serve as a warning to those who perpetrate serious crimes that they will do their time in jail.