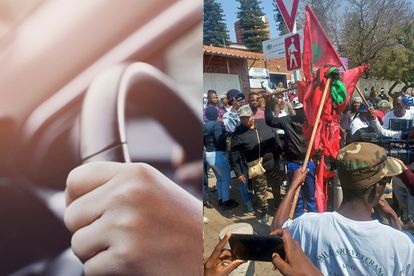 AVOID these streets in Pretoria due to Operation Dudula protest TODAY Photos: OperationDudela/Facebook/Stock/Canva

AVOID these streets in Pretoria due to Operation Dudula protest TODAY Photos: OperationDudela/Facebook/Stock/Canva

Motorists were warned that AVOID several streets as they would be affected by the Operation Dudula protest in Pretoria TODAY.

PRETORIA MOTORISTS SHOULD AVOID THESE STREETS

The anti-immigration group, Operation Dudula, is calling on mines in Bronkhospruit to prioritize unemployed South Africans when hiring instead of undocumented foreigners.

“Tshwane Metro Police officers will be deployed to monitor marchers and all affected streets.”

PROTEST: MINES SHOULD EMPLOY SOUTH AFRICANS AND NOT FOREIGNERS

The marchers will gather from 09:00 at Zithobeni extension 2 Taxi Rank at the corner of Masombuka Avenue and Mothibe Drive, Bronkhospruit Pretoria.

HERE IS THE ROUTE OF THE PROTEST:

From the gathering point, they will march on Mothibe Drive, turn left onto R513, and continue on R513 until they make their first stop at Russell Stone at 11:30.

From Russell Stone street, they’ll continue on R513 until they reach their destination at Goodrich Milling to submit their second memorandum.

The TMPD said marchers are expected to disperse from Goodrich Milling at 13:30.

THESE STREETS WILL BE AFFECTED:

The following streets will be affected:

USE THESE ALTERNATIVE ROUTES: