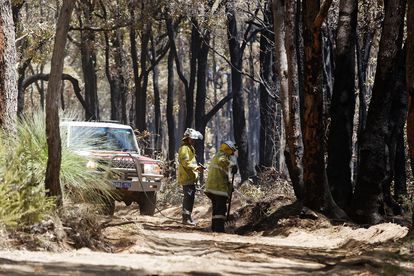 Firefighters conduct mop up operations in a smouldering forest after a bushfire that threatened homes was extinguished in the suburbs of Perth on February 2, 2022. Photo: TREVOR COLLENS / AFP

Firefighters conduct mop up operations in a smouldering forest after a bushfire that threatened homes was extinguished in the suburbs of Perth on February 2, 2022. Photo: TREVOR COLLENS / AFP

An emergency warning for the outskirts of Perth, the country’s fourth-largest city, was issued after a blaze that has now burned through about 100 hectares began Tuesday.

Emergency services have told residents they are “in danger and need to act immediately to survive. There is a threat to lives and homes”.

Perth is forecast to hit 34 degrees Celsius (93.2 degrees Fahrenheit) on Wednesday before ramping up to near 40C (104F) until Saturday.

“The emergency warning remains in place due to the wind intensity that is impacting the fire ground today, which continues to put pressure on containment lines,” the Department of Fire and Emergency Services said.

Meanwhile, a second bushfire in the state’s southwest had been “contained but not controlled” Tuesday afternoon, authorities said.

Evacuated residents near the small town of Kirup, about 220 kilometres (137 miles) south of Perth, were cautioned not to return to their properties as conditions could remain “very dangerous”.

A year ago, a devastating bushfire destroyed 86 homes in the city’s suburbs and burned through 11,000 hectares.

A 40-year-old man was charged with starting the blaze after police alleged he used a spark-producing angle grinder during a total fire ban.

Western Australia was spared the brunt of the devastating climate change-fuelled wildfires in the summer of 2019-20, which mostly ravaged the country’s two most-populous states, New South Wales and Victoria.