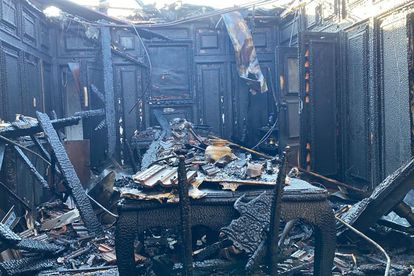 The remains after a house in Athlone, Durban North caught fire. Photo: Facebook/Netcare 911

The remains after a house in Athlone, Durban North caught fire. Photo: Facebook/Netcare 911

An elderly man has died after a house caught fire in Athlone, Durban North on Saturday morning.

When medics arrived on scene, the house was well alight with smoke billowing from the roof and windows.

ONE KILLED IN DURBAN HOUSE FIRE

An armed response officer and special operations team member  managed to rescue an adult female who had suffered smoke inhalation.

According to Netcare 911, the eThekwini Fire and Rescue Services managed to douse the flames, however most of the house had been destroyed in the inferno.

“A post fire assessment had been done by the Durban Metropolitan Police Search and Rescue Unit and sadly an elderly male was sadly found deceased.

“Circumstances leading up to the fire are not yet known, however the Greenwood Park SAPS was on scene and will be investigating further.”

A shack fire in Orange Farm left two children dead and another one injured this week.

According to EMS spokesperson Robert Mulaudzi, the blaze occurred on Monday evening, 23 May 2022. The cause of the fire is a lit candle which was left unattended. The mother of the three children, had left them alone inside their shack in Driezik extension 4 to buy more candles because the area had load shedding.

“The two young children, aged between two and four, succumbed to smoke inhalation and lost their lives during the fire incident,” Mulaudzi said.

The third child, a seven-year-old boy, sustained minor burn injuries and received medical care on the scene. He had to be transported to the nearest health care facility for further medical care.