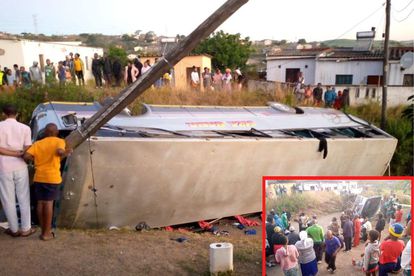 At least 45 people were injured when a bus returning from a funeral overturned in KwaZulu-Natal on Sunday afternoon.

AT LEAST 45 PEOPLE WERE INJURED WHEN BUS OVERTURNED

Reaction Unit SA (RUSA) spokesperson Prem Balram said they were alerted to the accident around 16:14 on Sunday.

“At least 45 people who were returning from a funeral were injured after a bus overturned outside the Waterloo Sports Centre in Waterloo – KZN this afternoon.”

He said reaction officers and RUSA paramedics arrived on the scene at approximately 16:14 and discovered the bus lying on its side.

“The driver fled the scene for unknown reasons. The injured were freed from the wreckage with assistance from RUSA Members and the public.

“The injured sustained mild to moderate injuries and were transported to a local hospital by private and provincial ambulance services.”

THE BUS WAS RETURNING FROM A FUNERAL IN BUFFELSDRAAI

According to the passengers, the occupants of the bus consisted of friends and family who were returning to Waterloo – KZN from a funeral in Buffelsdraai, Verulam, when the accident occurred.

Meanwhile, in an unrelated accident later on Sunday afternoon, one person was killed and two others injured after they were struck by an ADT Response Vehicle.

According to Balram, the accident happened on Palmview Drive in Palmview, KwaZulu-Natal.

THREE MEN CROSSED THE ROAD WHEN THEY WERE RUN OVER

“The three men were allegedly crossing the road when they were run over. The bakkie veered off the road and crashed down an embankment.

“Members of Reaction Unit South Africa (RUSA) arrived on the scene at 17:16 and found paramedics from Netcare 911 and KZN VIP treating the two injured pedestrians.”

He furthermore said the third pedestrian died at the scene. The Response Officer suffered minor injuries.

Both accidents will be investigated by authorities.