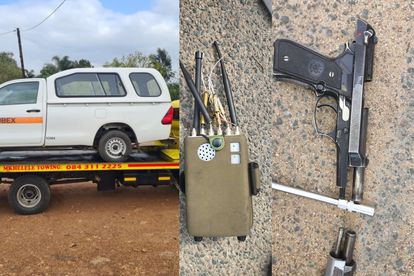 An arrested hijacking suspect was found in possession of a firearm that was stolen in August 2018.

Yesterday, 26 August, Mpumalanga police arrested two hijacking suspects who were found in possession of unlawful firearms and ammunition after being traced for an hijacking.

ALSO READ: One killed during shootout with police in foiled truck hijacking

Police spokesperson Constable Thenjiswa Ngcobo said at 08:30, Mpumalanga police received information regarding a vehicle that was hijacked in Mpumalanga township.

“Mpumalanga police with the assistance of other role players traced the suspects to Inchanga and they proceeded to the said area for observation,”she said.

PATIENCE PLAYS A HUGE ROLE IN BUSTING THE SUSPECTS

She added that hours later the vehicle that the suspects were travelling in was spotted driving on Mthoko Road in Inchanga area.

“The vehicle was intercepted and two men that were in the vehicle matched the description that was given by the victim.”

They were both searched and found in possession of two pistols, a signal jamming device, five cellphones including the one that belonged to the victim.

ALSO READ: Hijacking crime stats: You’re most likely to be a victim in THIS province today

“Police were taken to where the bakkie was recovered. A preliminary investigation revealed that one of the firearms was stolen in Isipingo during August 2018. The suspects are expected to appear before court soon,” she concluded.