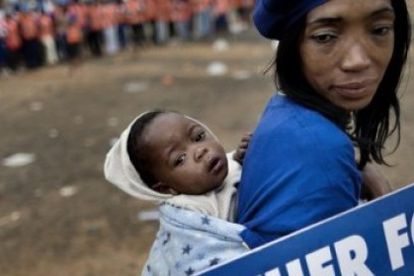 In an employment plan presented to a recent G20 summit in Australia, the South African government claimed that young black women make up 37.5% of unemployed South Africans aged between 15 and 34, and white men 31.5%.

During the summit in Brisbane – where leaders of the G20 nations committed to increasing the number of women in the global workforce – South Africa listed the low employment rate of women in the country as one of its key challenges. It stated that South African women are more likely to be unemployed despite obtaining education levels that are the same or higher than men.

According to the country’s employment plan, 37.5% of South Africans aged between 15 and 34 who are currently unemployed, but not studying, are black women – compared to white men at 31.5%.

Are these figures correct?

Statistics South Africa conducts a quarterly labour force survey to measure employment levels. The latest results are for July to September of this year.

It showed that 3,677,561 black women between the ages of 15 and 34 were not employed or attending schools, universities or colleges during this period. This is just about half (49.1%) of the total for both genders and all races in this age bracket.

What about white males? Only 82,605 were classified as “unemployed, but not studying” in this time. This works out to a mere 1.1% of the total and a fraction of the 31.5% claimed in the South African government employment plan.

But to use the composition of this unemployed group as a base of comparison is not really helpful – given that South Africa’s population includes four major race groups (black, Indian, white and coloured) that varies widely in number.

According to Stats SA’s midyear population estimate, the South African population included 8,057,561 black women between the ages of 15 and 34. Taken with the unemployment data, this means that almost one in two of the women in this group (46%) does not work or is not studying. This is the highest ratio of all the race groups and genders.

Stats SA determined that there were 603,917 white men in that age group in South Africa. This means that only one in seven (14%) was not working or a student, the lowest of all race groups and genders. Second lowest are white women and Indian men – both at 22% – with coloured women ranking second highest at 39%.

* The official term is “not employed or in education/training”

Conclusion: The claim is incorrect

The South African government is rightly worried about the exclusion of women from the job market, especially those between 15 and 34.

But in getting their numbers wrong, they skew the picture for policy makers. African women between the ages of 15 and 34 years constitute 49.1% of youth not employed or studying – not 37.5%. And the corresponding figure for white males is 1.1%, not 31.5%. Only one in seven white males are not employed or studying, but for black women this figure is nearly one in every two.